BassMan Austin – Who is he? 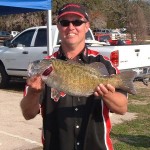 BassMan Austin grew up in Orangefield, a small town in East Texas where he learned to bass fish on lakes such as Sam Rayburn and Toledo Bend. After graduating high school he went on to serve 10 years in the U.S. Air Force and earned a Bachelor of Science degree from Wayland Baptist University. He fishes competitively in Bass Champs, Fishers of Men Tuff Man and the Wal Mart FLW Outdoors Texas Tournament Trail series. 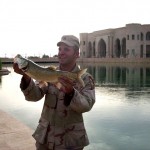 BassMan Austin is dedicated to community service. He led the effort working with local bass fisherman and businesses gathering and sending donated fishing equipment to soldiers in Iraq. SSG Jason Perrego is shown to the left using this equipment to land bass in Iraq. Additionally, BassMan Austin regularly donates fishing trips to local churches, schools and great organizations such as The Grace Foundation of Austin, American Cancer Society, Shriners, Knights of Columbus, C.A.S.T and the Humane Society.  He also has donated time volunteering for Habitat for Humanity and being a lover of dogs, is an ASPCA member.

BassMan Austin and his wife Lesli are also members of the Mr. and Mrs. Bass Club of Austin and in 2010 and 2013, they won the Anglers of the Year title.

Permanent link to this article: https://bassmanaustin.com/about-bassman-austin/